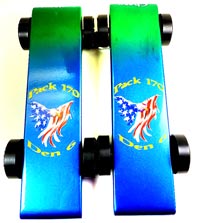 Sadly, I live only two towns away from Sandy Hook, CT, scene of the horrific tragedy that took place on Dec 14, 2012 at Sandy Hook Elementary School. Two Tiger Cubs were among the 26 people tragically killed that day.

To honor their memories Pinewood Pro and several Packs around the country built tribute cars for Chase Kowalski and Benjamin Wheeler. If you know of other tribute cars, please send pictures of your cars so we can include them on this page.

I created two Spirit of the Eagle cars; one for Ben and one for Chase.

The Spirit of the Eagle Award is a Boy Scouts of America (BSA) honorary posthumous special recognition for a youth member under the age of 21 who has lost his or her life. 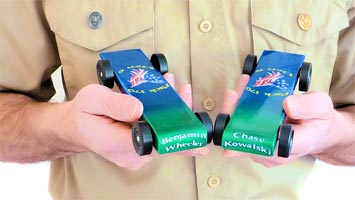 The intention of this award is to help heal and comfort the youth member’s family, loved ones, and friends with their loss. It recognizes the joy, happiness, and life-fulfilling experiences the Scouting program made in the youth's life and serves as a final salute and tribute to the departed. 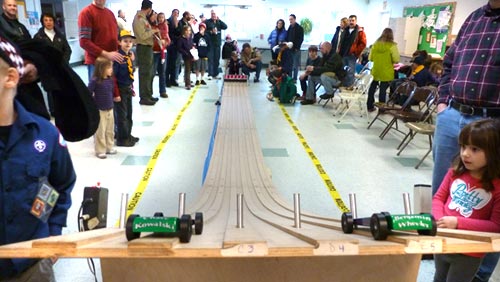 The tribute cars for Tiger Cubs Ben Wheeler and Chase Kowalski were raced at the Sandy Hook Pack 170 Pinewood Derby race. When they were raced with the other four Tiger Cub cars in Den 6, they were placed in the outer lanes, 1 and 6. As the boys saluted, we pulled the lever. What happened was truly astounding...

Ben's and Chase's cars flew down the track and BOTH cars arrived at the gate in the exact instant! You will see a "1" on lane one AND on lane 6, which means both cars tied for 1st place...note that the electronic timer measures to 1/1000th of a second!!! What happened was virtually impossible. If you believe in divine intervention, this was it. Call it spiritual or call it magical...something went on there.

See miraculous video for yourself. Spirit of the Eagle pinewood derby cars race to a miraculous First Place tie.

We Remember Sandy Hook
Car made by a Cub Scout Pack in Shelton, CT
showing the names of
all 26 victims
in the Sandy Hook Tragedy 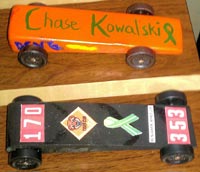 Texas Tribute Cars
Two cars built
by a Cubmaster in Texas
to commemorate Chase and Ben.

If you are moved to build a car here are some ideas:

Send pictures of the cars and we will post them on our Sandy Hook Pack 170 Den 6 tribute page.

The best part of pinewood derby is designing a unique, cool car that you can call your own. Don't worry about aerodynamics because it is almost insignificant. We identify dozens of other speed tips in Winning Pinewood Derby Secrets that rank far above aerodynamics.

Winning Pinewood Derby Secrets contains all the tips you need to win your race. Updated annually with the latest tips and speed products, our book has proven results with 1000's of winners... but don't take our word for it! Read over 90 Customer Reviews and check out our Winners Gallery!