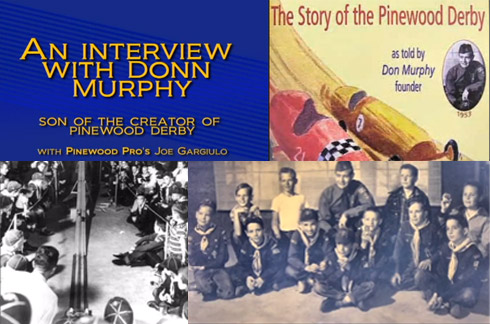 Watch this presentation and listen to Joe Gargiulo, the founder of Pinewood Pro, interview with Donn Murphy, the first pinewood derby racer!  Donn's father is the inventor of pinewood derby car racing and he wrote the book PINEWOOD! The Story of the Pinewood Derby. Don Murphy's book includes full details, complete with pictures from the original race, original drawings, rules, etc. about how he invented pinewood derby cars and racing in 1953.  His book is a great resource for any Cub Scout Pack, scout enthusiast, historian or Boy Scout collector.

Who started the pinewood derby?

For any scout or pinewood derby historians, I would strongly recommend reading a Joe Gargiulo's brief history of the pinewood derby and also picking up a copy of Don Murphy's book that gives full details, complete with pictures from the original race, original drawings, rules, etc.  A great resource for any Cub Scout Pack or Boy Scout collector.