The Army Humvee crushes the competition

No Shipping Cost for this item

"Excellent design...easy to do. We made "bore holes" in front, top and the two recommended in the back to add weight, then covered with wood glue. The design won award for best looking car, and we also won the local race...faster then it looks."

Roll over the competition with the Army Humvee Hummer pinewood derby car design.

This is an easy car to build!

This design comes with a complete 3D plan with clear, step-by-step instructions, as well as 3D AutoCAD graphics to help you build your car.

This plan also helps you with weight placement, gives you speed and building hints, tells you exactly what tools you'll need, and includes car cut-out templates for use as a cutting guide.

We'll even show you your Humvee rotating 360 degrees so you can view it from all angles and we'll let you see your car in 6 different colors to help you decide your own color!

Pinewood Pro's 3D derby car designs are the best on the market, guaranteed!

Each car design plan comes with cut-out templates so you can't make a mistake.

We even show your car in 6 different camoflage colors,

plus give you a 360 degree animation of the final car so you can view it from all angles!

Below are some sample pages from one of our car design plans. Each plan is over 30 pages of detailed step-by-step instructions, essential speed tips, color schemes along with direct links to everything you need to make your car.

Visit our full pinewood derby car picture gallery and enter a picture of your car! 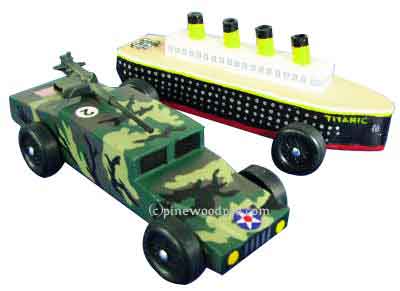